To incite insight,
We must recite re-sight.

I am shrinking. The last time I went to get my blood pressure checked they measured my height. I was six foot even. In high school, I was six foot one inch. I feel that I'm getting smaller internally as well - less mental energy, fewer ideas.

While I've got pains in the joints, what pains me most is to see my good friends and colleagues who work at the university in upper administration try to squeeze blood from a stone, making budget cuts while trying to preserve what is essential on Campus. They are wearing down, yet there is still a very long road ahead.

My sister-in-law's son passed away a couple of days ago. He was her first born, living in a facility rather than at home because he had severe birth defects. I met him once when on a Texas visit we drove up from San Antonio to Austin. His brother was very affectionate with him, that's what struck me most, but I couldn't understand a word he was saying. We got a call very early in the morning a couple of days ago. Pain and tears must be shared. Yet it is a blessing.

I've been (not) reading several books at the same time, most recently Csikszentmihalyi's Flow, as adults our raison d'etre. The concept seems right. The question is how to produce it. One of his students, Keith Sawyer, has written Group Genius, a book that argues for jazz-like improvisation as the way to achieve flow. That makes sense. There are stern requirements for putting together an effective ensemble. Our motley read group doesn't pass muster, at least not yet. We are just getting to know one another. I know how to make argument, but not how to riff. I don't even like the work riff; it is too alien for me. With friends, and students too, critique is a form of affection. At a minimum, it shows we're listening. We could, however, still be missing the point.

If not thinking of the context in which Joyce wrote Dubliners (I've done that in my prior posts), should we spend some time on the setting in which we are reading it? Mine is trying to make sense of what is happening now by looking back at what happened when I was a kid.

Yesterday I read Two Gallants. In each of the stories so far I've taken note of how Joyce forms his sentences in the first paragraph or two. They are invariably about setting. There is great economy of word use and metaphor in casting the picture of the relevant scene, definite lessons for the writer there. A little further into the story that narrative takes over and I lose track of the individual sentences and choice of words. Two Gallants is a bit different. The entire story seems a picture. The narrative is very spare.

I thought back to high school English, perhaps 10th or 11th grade, and maybe we were reading Green Mansions or The Ambassadors, neither of which stuck with me. In a bit of group think, the class decided it didn't like descriptive writing and wanted narrative only. Give us the story. The rest is just needless detail.

Where does this come from? As a younger kid my family went to the World's Fair, not too far from our house. My dad was fascinated with the International Pavilion and the artifacts from the various countries. I couldn't have cared less. I was there for the rides. In a few weeks both of my teenage sons and my wife will head to Disney World with the High School Band. Now that is just about the last place on earth that I'd like to be.

Stories get to us very early. Parents read to us before going to sleep, even parents who we don't otherwise see during the day because they are at work. Of course there was Winnie the Pooh and Christopher Robin. I had some stories my kids never got - Till Eulenspiegel and Baron Munchhausen. And there were Aesop's Fables. They had a moral to the story. Alan says (and many others do to) that school inculcates this sense of there being a right answer and our job is to reproduce it. Then when we can't, or won't, some sort of psychological reaction occurs. I think we should give school a break and look for the culprit in us. Grade school, at least it seems to me, is not so different from having bedtime stories. We want the stories. And we want the morals to them too.

Somewhere along the way school changes because we want kids to grow up. My thought is that as a society we're rushing that. Life expectancy is long enough nowadays that kids should take there time maturing. The impatience to do otherwise is us. We all game the system.

Mostly, the pictures that are important to me are in my head, images I can recall from time to time if not on command. Many of them are of my father; some are of friends. When I was in grad school I do recall going to the Art Institute and seeing a painting, I believe by Picasso before he embraced cubism, that was the face of Jesus, the most compassionate face I had ever seen. I've had some recent experiences with memory where it was clearly playing tricks on me because the thoughts were inconsistent. One then wonders if it is only a minor error or an entire fabrication. So I lack confidence in this memory, but I would like to see that picture again if it is exists. I'm interested in it for itself and it for my reaction. Mostly, though, I don't need or want things to look at to rekindle memories.

In this others seem to be different. I received the postcard from Barbara. Her prose on the other side was about the story Eveline. Barbara sees ideas through real photographs in a way I do not. 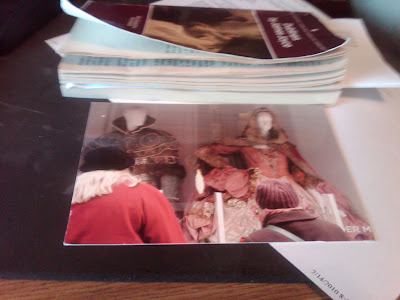 It did occur to me that Two Gallants was a painting drawn with words, just like a Toulouse-Lautrec. From a painter, we expect an interesting rendering of the image, but don't demand a moral to the story. Growing up, we had a painting or a print of a bum wearing a Fedora in our living room. I never asked why it was there, whether for compassion, or culture, or just an interesting face to look at.

It also occurred to me that we as readers have never known hunger, but many who were reading Dubliners at or around the time of its publication did. Our imperative now is to make meaning of our lives by providing for the betterment of others. That our essentials will be taken care of is understood. That the characters in the Two Gallants were hustlers a la Midnight Cowboy rather than productive types could be a morality lesson, but I really couldn't tell.

Barbara says in her post to let the prose draw you in for itself, not to feel impelled to produce something with it. It is hard to do that now. I did wake up this morning (way to early, though that is usually the case) and wonder whether I dream in pictures or as a narrative. Maybe that is something.
Posted by Lanny Arvan at 8:43 AM

Thanks for this thoughtful, thought-provoking post. "Two Gallants" strikes me as a hard, cold story--a painting drawn with words, as you say so beautifully-- in which nothing shifts, nothing will shift. The final sentence of the first paragraph launches this sense of repeated movement going nowhere: "Like illumined pearls the lamps shone from the summits of their tall poles upon the living texture below which, changing shape and hue unceasingly, sent up into the warm grey evening air an unchanging unceasing murmur." Not a pretty picture of what goes on just beneath the surface of Dublin.

I'm interested in what you say about not seeing ideas through photographs--you must have struggled with that postcard I sent you! Perhaps that I majored in art history and take so many photographs makes me particularly inclined to read metaphor in the visual. Perhaps because I work in storytelling I see story everywhere. You say you do not but your posts have this wonderful way of meandering from image to image, so perhaps you are more visually inclined than you think.

I'm enjoying your take on these stories and seeing how you weave them into what you are experiencing. You are enriching my reading indeed!

I struggled a little with the photograph on the postcard. Then I started to use it as a bookmark, not the intent I know, but that way I'd look at it on occasion in case a thought did occur to me.

I'm quite visual in my thinking. It's just that the stimulus is usually not photos. I don't have that ready list of metaphors that you talk about.

Joyce did paint very much the souls of these two characters before they even spoke- just be the way he described their walking pattern and gestures.

On an unrelated note, I am chucking to see on your sidebar the old LTA links I built for Steve Gilbert's crowd when I was at Maricopa- they have killed the server and the links are bad, but I enjoyed seeing the moldy oldies.

Alan - thanks for the comments.

I wish I could write that way on occasion - writing as painting. After our group has concluded I'm going to experiment with some pieces that attempt to do that. The part of Joyce that I'm admiring here so much is the economy and efficacy in his descriptions.

And maybe I should rename what you took not of the (let it) slide bar. Obviously it hasn't been tended to for some time. It is interesting to know you where the author of LTA host. The world is kind of small. One of the things the motley read is showing.

Let Me Hear From You

Lanny Arvan
Lanny retired from the University of Illinois in August 2010. Before that he was an Associate Professor of Economics and Associate Dean for eLearning in the College of Business. (Department of Economics Lanny Arvan page - archive) Lanny was also quite active in the Higher Education community for Information Technology. (Educause Lanny Arvan page) Since retirement, Lanny has taught one course per year offered in the fall on The Economics of Organizations and he has mentored a handful of students each year as well. He did that until Covid. He hasn't taught since. Lanny maintains a blog called Lanny On Learning with a focus on undergraduate education, but there are also posts on economics, national politics, books he's read, movies he's seen, and anything else that catches his fancy.